…Not necessarily in that order, but they were all present this weekend.

I’ll begin with the “big project”, the refinishing of the mirror. I had originally scored this at a yard sale last year. It had a cherry red finish which didn’t match anything in my house, so I sanded and stained it a dark espresso brown (the same stain used on the console table my dad built for us).

It’s been packed away since September collecting dust in the garage, and it was finally time to be put to good use in the dining room. Here’s the official before shot: Still a lovely mirror, I just wasn’t feeling the dark wood anymore. My goal for this house is keep things light and airy, so I weighed my options. I could play it safe and paint it pure white… but I plan on installing (white) wainscotting soon, accessorizing with white shelves and frames, getting a new possibly white dining table with more white accessories… I was worried it’d be too much white. Then I considered doing some sort of two-tone patina effect with possibly a pale aqua underneath and then a white on top. I even went to the hardware store and picked up the perfect aqua shade… but then I changed my mind. This image of pale whitewashed wood kept popping into my head and I wanted to try and re-create it. If it turned into a disaster, I could always just paint it white and call it a day.

So I armed myself with the materials I thought I’d need.. Turns out paint thinner does absolutely nothing to remove stain from wood. Good to know. The sanding block was pretty user-friendly, but it was a medium grit when I should have been using something more heavy-duty. This stain was in there good.

I quickly learned this was a very messy process… I had to keep the dustbuster on hand to suck up the debris every few minutes. After a good 45 minutes of sanding, I had one side done… And my arm was about to fall off. This was more work than I remember it being the first time around.

Another angle to show the difference: So I trekked on and pushed through it, minute by minute… hour by hour…. I had no idea what I was doing, but I figured there wasn’t much more to it than slapping on some watered down paint. So I gathered my materials and mixed the magic potion… And lightly began to apply to the freshly sanded wood… To my surprise, it wasn’t looking so bad. I was using way too much water at first, and by the end it was basically a dry-brush effect with very little or no water. I wanted to still be able to see some of the grain and wood texture through the paint so I kept it very light. Here’s an almost-done… After a few touchups, we have the final result! 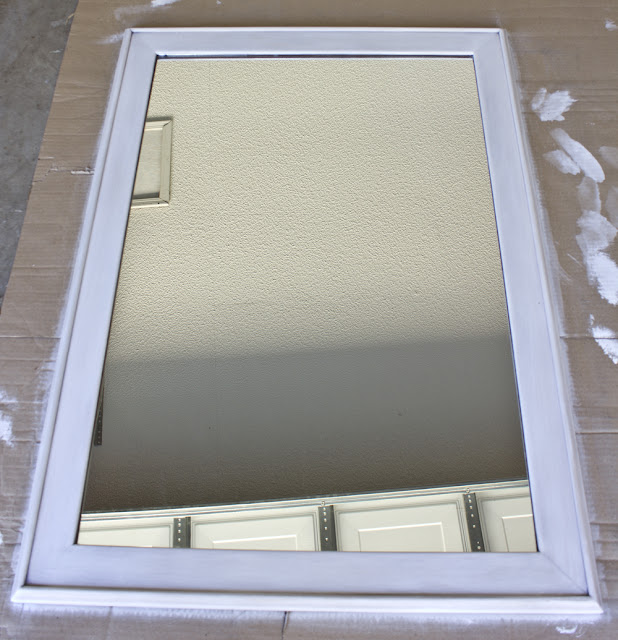 You’re probably thinking “Okay… um, this is just a white mirror” because I know it looks that way from the picture, but I promise up close it’s really not. It has a weathered, faded look which was exactly what I was going for.

Back to the not-fun part… the installation. In the past we’ve had nothing but horrible experiences with hanging large, heavy things. We can attribute that to the fact that we (as usual) did not have the right materials. I’m determined to break that cycle in this new house. So I dropped $15 on a french cleat from Home Depot. This one’s rated at 200lbs, which I got just to be safe. The mirror probably only weighs maybe 40 or 50lbs, but I dont like to take my chances, especially with drywall. Surprisingly, the instructions said there were no drywall inserts (or studs) needed. We were both a little skeptical, but it came with fancy drywall screws and Brad thought it’d be ok. Here he is installing the two parts: And just a few minutes later, no hiccups invoved, we had success! Best $15 I ever spent. Seriously guys, if you have something flat and heavy, use a french cleat! With that taken care of, I was able to hang these candle lantern sconces I picked up at Garden Ridge for $20 a couple months ago: Now our dining nook (the poor neglected space of the house) is finally starting to look like one! But no dining room is complete without a light fixture. And I’m happy to say, as of two hours ago, we FINALLY have a light.
Behold… I picked up this wind chime at a beach shop a couple months ago, with the intention to convert it into a chandelier. This might have been the hardest project of my life. I won’t even get into the near impossible process because I’ve been dealing with trying to retrofit it for weeks, but it’s finally hanging now and that’s all that matters (just waiting to hear a big crash in the middle of the night….) At least for now, as long as it stays up there, I can enjoy it, and the awesome sun/flower it projects on the ceiling: More pics… cause who doesn’t love shells on a chandelier?? Ahh yes. My life is now complete. Hopefully I can show you the bottom half of this room soon, when it gets a little less boring.

Here’s something not boring though… our pool is now a light show! Brad apparently hadn’t gotten his LED fix from all the yard lights we did a few weeks ago, so he went and bought a color-changing LED pool light (these things are not cheap either… hope it lasts and proves it’s worth the $150 price tag…)

Prepare yourself for this awesomeness… And on that note, I’ve got a date with the couch & the Grammy’s in 5 minutes… more fun stuff coming in the next post!